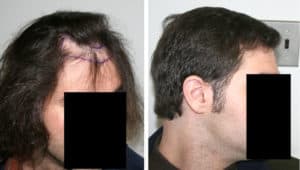 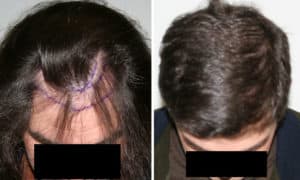 This patient is a male in his late 30’s who always had long hair. He suffered from thinning in the frontal region for years, but was always able to cover it up with his very long hair style. He decided it was finally time to switch to a shorter hair style, but knew this would accentuate the frontal thinning he previously kept hidden. So he decided to undergo a hair transplant before cutting the long hair off. Using a total of 2,200 grafts removed via the FUT technique, we performed a rebuild of the majority of the frontal scalp. The patient returned 12 months later to showcase both his results and how well he was able to now wear his hair shorter.