Can I Have an FUT (“Strip”) Surgery AFTER an FUE Surgery?

Most hair transplant surgeons who can perform quality Follicular Unit Transplantation (FUT or strip) AND Follicular Unit Excision (FUE) surgery advise patients of the benefits of undergoing FUT before FUE. Among the many benefits of FUT compared to FUE, one of the most important is the effective usage of the finite donor region. The only way to maximize the donor region and remove as many grafts as possible over a lifetime is to start with FUT procedures and then move to FUE afterwards if more grafts are necessary. Strip surgery allows us to perform multiple harvests from the best region of the donor without reducing the overall density of the region — AND while only leaving one very small and confined area of damage: the linear incision line scar. All areas around this incision line are untouched and available for FUE harvesting. By starting with FUT harvests and then switching to FUE harvests, a patient can maximize their donor potential and ensure they have enough grafts to complete their goals.

But what about the other way around? Can a patient start with FUE and then have FUT surgery? 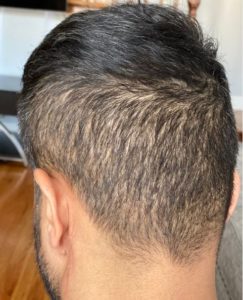 Patient after FUE procedure at outside clinic, prior to FUT at our clinic. Not even a “big” FUE by the standards of some clinics, but can see how more FUE harvesting would noticeably thin the donor.

The simple answer to this is: Yes, they can. However, it is, unfortunately, not that simple. And I say “unfortunate” because with the heavily marketed falsities pushed by FUE groups online today, we are seeing a huge influx of patients who underwent large FUE procedures with poor results and now require repair. In most cases, the only way to repair these patients is with strip surgery. However, there are issues when it comes to performing a strip harvest after a patient has undergone FUE surgery. Let’s break down some of these issues and explain why it is not advisable to start with FUE — especially large FUE surgeries.

The first thing to understand is the difference in “global” or total density in the donor region after an FUE versus an FUT. In an FUT procedure, we remove an entire sliver or “strip” of hair-bearing skin. Obviously if we left this area open to heal it would cause a large gap in the donor area and the total density would be greatly decreased. After removing the strip from the donor region, however, we immediately bring the edges of the area together and close it with stitches or staples. Eventually this area heals into a small scar (typically with a width of 1mm), but the density of the donor surrounding the incision line scar — or “strip scar” — is exactly the same because it has not been touched. So the overall, “global density” of the donor region is unchanged after a strip harvest. The same cannot be said after FUE.

Since we can only remove about 30-50% of donor density before it begins to appear thin or patchy, we can see why FUE is an inefficient manner of harvesting compared to FUT where we can remove 100% of the density from an area — multiple times even — without creating a thin appearance. This means if we start with FUE first, especially large FUE sessions, we can only take a limited amount from the donor. After we have removed 30-50%, the donor is essentially done and cannot be harvested any further. Patients who start with FUE quickly exhaust their donors and find themselves in situations where they want to do more surgery, but cannot because the donor is right on the verge of looking thin and any further harvesting will create a sparse, sickly appearance.

Okay, but why not just take a strip once we get to that point? As previously stated, harvesting a strip won’t reduce

The same patient 10 days after a 1,500 graft FUT. Note the small incision line as the only area of “damage.”

the density any further. Well, the problem taking a strip after this point becomes twofold: first, the graft yield from the strip, even a large strip, will be very low. And why is this? Because 30-50% of the grafts were already removed with the FUE. So now you are harvesting a strip that is 30-50% bare scar tissue containing no hair. This means a large strip that may usually yield 3,000 grafts will not only yield maybe 1,500. This creates a situation where the scarring in the donor we are creating may not justify the amount of grafts we obtain from the strip. This is especially valid because it also becomes harder to camouflage a strip scar when 30-50% of the donor is missing. If the average patient with normal density can hide a strip scar at a #3 on the buzzer (3/8ths of an inch), a patient missing half his density will need to go twice that length or maybe more. This is not a good approach.

But, we did say patients can undergo FUT after having an FUE — right? Yes, they still can; and sometimes, this is the only option available. These patients must simply accept that we will likely get out fewer grafts and they may need to wear their hair longer or utilize minimal scar grafting (if possible) or Scalp Micropigmentation (SMP) to minimize the appearance of the scar. It is still a viable option — and one we find ourselves performing more and more frequently as patients are lured into disastrous FUE mega-session procedures.

But what about those patients who really, really want to undergo FUE first? Those who want to “test” the waters with what they believe is “less invasive” FUE (not actually the case) or those who want to try FUE first for a smaller case and hope they don’t thin more and require more surgery up the road? My advice to these patients is simple: start with a small FUE case. Make sure the case is 1,500 grafts or less. If an ethical clinic utilizes the entire donor properly and stays at 1,500 grafts or below, you are unlikely to thin out the donor to any significant degree and FUT should be a good option in the future. If a clinic tells you that more than 1,500 grafts or required or if they are having a hard time harvesting/removing grafts and more than 1,500 attempts are required, do not do FUE. You are going to put too much stress and strain on the donor area and limit your options for the future. Remember: you only have one donor area; use it wisely!

Newer What is Scalp Micropigmentation (SMP) for Hair Loss?
Back to list
Older What is the Right Age for a Hair Transplant?
close