Does a Hair Transplant Leave a Scar?

Some of the more common questions we’re asked during consultations involve the scarring left behind from a hair transplant surgery. This is understandable. Hair restoration is elective, and no one wants excessive scarring from a procedure aimed at improving appearance (though a hair transplant really does so much more than simply improve one’s appearance).  However, hair transplant surgery is still surgery and there is no way to ever perform surgery without creating some degree of scarring. In fact, most medical organizations have released statements condemning those who advertise any sort of surgical procedure as “scar free.” So what does this mean for patients? Will there be visible scarring from a hair transplant? If so, where will it be? Is there anything that can be done to treat the scarring in the end if necessary?

Scarring from a Hair Transplant

As previously stated, any surgical procedure will create a scar. Hair transplants are no exception. Thankfully, however, “scarring” is relative. Any time the body undergoes any sort of trauma where 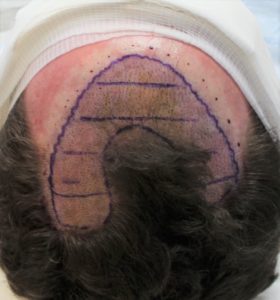 Patient undergoing second surgery. All hair within the purple lines is transplanted. No visible scarring appreciated.

inflammation and wound healing is involved, scar tissue is created. Even a paper cut or a bump on the head leaves scar tissue under the surface of the skin. During a hair transplant, there are two areas where “cuts” are made: the donor area during graft removal, and the recipient area (the bald/thinning scalp) when tiny incisions or slits — also known as “recipient sites” — are made for the new grafts.

If done correctly and with very small, very minimally invasive tools, scarring from creating the recipient sites should not be visible. There will be scarring under the surface of the skin, but it should not be visible above the surface. The only time scarring is visible in the recipient region is if large tools are used or if a clinic places an inappropriate amount of grafts too close together and causes damage. Otherwise, this portion of the scalp should look relatively the same above the surface. In this sense, there really is no “visible” scarring in the recipient area — though, again, it is disingenuous to suggest there is “no scarring” whatsoever because there are changes below the surface of the skin.

Scarring in the donor area from where the grafts are removed will be visible and permanent. Regardless of the method used, we must make cuts to remove the grafts from the donor area. Any time we make a cut of this nature, there will be scar tissue left behind in its place. This is an irrefutable fact. Any person who claims a hair transplant surgery can be “scar-less” is lying. The good news, however, is that scarring from harvesting during a hair transplant is very minimal, difficult to appreciate, and hidden below the hair. In order to talk about scarring in the donor region, it is important to discuss the two different harvesting methods: Follicular Unit Transplantation, also known as FUT or the “strip” procedure, and Follicular Unit Excision, also known as FUE or sometimes by it’s older name “Follicular Unit Extraction.”

During an FUT procedure, a small strip of hair-bearing skin is carefully removed from the donor region. After the “strip” is removed, it is immediately closed with either sutures or staples. The resulting scar from this harvesting method is a fine, linear incision line in the donor region. The typical FUT scar heals anywhere between a “razor blade” 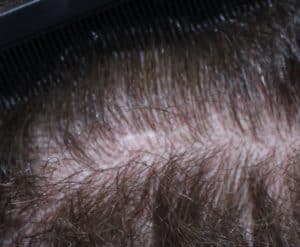 line that is less than 1mm in width to a slightly large “marker line” that is maybe 2mm in width in patients with certain physiological characteristics. Anything within this range is considered normal healing. Hair grows above, below, and even through the FUT scar (using a special closure technique), and the scar is completely hidden underneath any reasonable length of hair. Furthermore, because the scars typically heal so well patients who would like to wear shorter cropped hair cuts on the side are still able to go quite short; we advise patients they can go down to a #3 on the barber clippers (3/8ths of an inch). In exchange for this linear incision line, FUT provides us with the greatest number of available grafts per sitting, atraumatic harvesting with no stress or strain on the grafts, and no other damage or scarring in the donor region which guarantees more donor available for future surgeries. We also remove the prior FUT scar with each subsequent strip harvest, so strip patients will only ever have one scar in the donor regardless of how many times the area is harvested.

During an FUE procedure tiny tools ranging anywhere from less than 1mm to several millimeters are used to carefully cut around the individual follicles (or several follicles). After making the cut around the follicles, forceps (medical tweezers) are used to “pluck” the grafts free. Unlike FUT, the small holes left behind from the cutting and removal of the grafts are left open. These then fill with scar tissue and leave small “dot” scars wherever a graft was removed from the donor area. When done appropriately, scarring from FUE — just like FUT — can be excellent. Truly hard to even appreciate. However, the operative word there is “appropriately.” In order to truly minimize the visible appearance of scarring from FUE, the number of extractions needs to be small. Once too many grafts are removed, thousands of little dot scars are created and these are visible. Not to mention the fact that this begins to have a diffuse thinning effect on the donor area, which makes the damage more visible in general. Since scar tissue is typically lighter in color compared to natural skin tones, patients with darker or tanner skin may have more apparent scarring from FUE because the pale “dots” will stand out on the tanner skin.

There is also another factor to FUE scarring: the scarring underneath the surface and how this affects the rest of the donor. When our body heals and creates a scar, it does so by first activating an 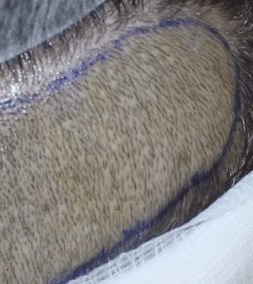 inflammatory response. During this inflammatory response, the body sends all types of cells to the site of damage in a somewhat haphazard manner to begin the healing process. While this typically results in a minimal amount of scarring above the skin, the scarring and damage below the skin where the inflammatory response occurs is typically bigger and less organized. This means the scar below the surface is almost always bigger than the scar above the surface. In FUT, this is not a problem. A 1mm FUT scar may have an additional 2-3mm of “fibrotic” scar tissue below it underneath the surface of the skin, but everything beyond that is unaffected. That means the hair follicles only several millimeters away from the FUT scar are totally unaltered and ready for future harvesting. The same cannot be said for FUE scars that form too close together. When FUE cuts are made too close together, there is an overlap of larger scar tissue underneath the skin. This creates a net-like web of scar tissue (called sub-dermal fibrosis) which involves the surrounding follicles. This means the follicles left behind in the donor area are now wrapped in scar tissue underneath the skin. This makes them difficult to harvest in future procedures and may reduce their overall health.

As previously stated, however, the scarring above the surface can be excellent. Small 1-2mm dot scars spread far apart are difficult to appreciate. The nature of FUE scarring typically allows patients to go a little shorter in the donor area before the scarring can be appreciated. We tell our FUE patients they should safely be able to go to a #2 (1/4th of an inch) on the clippers. However, some can go even shorter. It is important to note, however, that FUE is NOT “scar-less” surgery. Many unethical practitioners previously tried to make this claim, and patients who underwent procedures with this understanding were robbed of true informed consent. This resulted in several state medical boards and numerous medical organizations stepping in to correct the misinformation. You will have scars if you have an FUE procedure, and those scars will be visible if you buzz down short enough. There is no such thing as “scar-less” surgery and there is no true option to just “shave it all off” if you aren’t happy with the results of the transplant.

Treating or Minimizing the Scarring?

While most patients are left with very minimal scarring which is well hidden — and well worth the trade-off of effectively restoring their hair, there are things that can be done to minimize the scarring even further if necessary. The two most effective methods are placing grafts back into scars, and undergoing Scalp Micropigmentation (SMP). 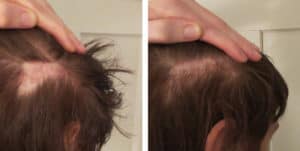 To place grafts back into the scar, we use the FUE process to remove a small amount of grafts, make recipient slits in the scar itself, and then place the grafts into the scar tissue. While transplanting grafts into a scar via FUE can be quite successful, it is variable. FUE typically has a lower growth rate compared to FUT and scar tissue is different and unhealthy compared to virgin skin. Scar tissue is composed of different tissue and also lacks the same healthy blood supply. The combination of variable growth in general and more hostile tissue makes grafting into the scar somewhat challenging. Patients should be aware that it may not grow quite the same and several passes may be necessary.

Scalp Micropigmentation (SMP) is a process similar to standard tattooing. Instead of regular inks, however, more natural pigments are used. And instead of using the tattoo “gun” to create artistic designs, the SMP artist uses it to create small dots which look like shortly buzzed hair or hair “stubble.” This can technically be done all over the entire scalp, but works particularly well for some patients in the scar tissue. The SMP helps darken, camouflage, and break up the appearance of the scar tissue, and this process typically allows patients to wear shorter hair without the scar showing. Both SMP and FUE can be used to treat surgical scarring, and the combination of both is probably the most effective.

So, does hair transplant surgery cause scarring? Absolutely. Is it minimal, well hidden, addressable in the future, and typically well worth the trade off? Absolutely.

Newer Can I Drive Myself to and from my Hair Transplant?
Back to list
Older Scientists Discover What Turns Hair Gray
close