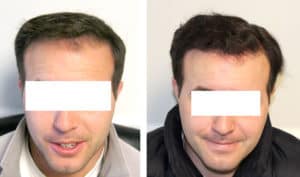 This patient is a male in his 30’s who had a transplant a decade before in his 20’s. He only had minor hairline recession at that time, and, like almost all young patients, he wanted to put his hairline back in the low, flat position where it was a few years prior. What the clinic should have done was instructed him that this was not advisable and may look unnatural if he continued to thin. What they did do was create a low, immature hairline. To make matters worse, it was done with insufficient density and poorly prepared grafts. The patient maintained his native hair behind the new hairline for some time, and the transplant looked “okay.” Eventually, however, he continued to thin and the near-sightedness of the transplant design became apparent and he came to us for repair. Instead of repeating the same mistakes and placing our hairline low and flat like the prior one, we rebuilt a more appropriate hairline behind the previous transplant. We removed 2,800 graft via the FUT technique, and used these to rebuild the new hairline, densely pack the frontal area behind it, and strategically fill the mid-scalp behind to meet his native hair. We informed the patient that the previous transplant should blend with the new transplants behind it, but the prior transplant could be removed at a later date if he wanted. The patient returned 12 months later, and was very happy with the outcome and did not feel the urge to make any additional changes.