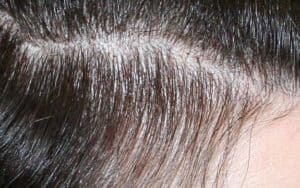 One of the areas most commonly affected by hair loss are the hairline “corners.” For most men, this corner recession is the first region where hair loss is noticed. For many, it is only the beginning; the hair loss only spreads and worsens from there. For other men, however, it remains isolated to these corners. Those with hair loss isolated to the hairline corners often believe it makes them look older or changes their facial shape, and many want it “fixed.” Because of this, it is one of the most common areas we treat with hair transplant surgery. Because it typically calls for a smaller graft number, it’s also a very popular procedure to do via FUE. And that is exactly what we did for this patient. Using the FUE technique, we removed 700 grafts and implanted approximately 350 to each side of the patient’s hairline in the receded corner region. The patient returned for a follow-up 12 month after surgery, and clearly the plan worked. While addressing corner recession is typically subtle, the patient now has a well-defined, uniform hairline without any exaggerated recession in the corners.