What is Scalp Micropigmentation (SMP) for Hair Loss?

While our office specializes in treating hair loss with hair restoration surgery, we understand that hair transplantation is not the only “tool” available in the “tool chest.” We personally believe it is the most effective treatment for hair loss, but it may not be best suited for all patients and may be even more effective when combined with other treatments. One of these other treatments is Scalp Micropigmentation or SMP. It is a non-surgical, minimally invasive approach which helps thicken the appearance of long hair, recreate the appearance of short “stubble” for a shaved-head look, and also camouflage scars. But who is SMP for? What is the process like? Should it be used with a hair transplant and, if so, how long after a hair transplant should you wait before undergoing SMP?

SMP is a tattooing-like process where a device, much like a tattoo gun, is used to put pigment into the skin. While it 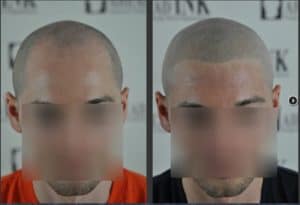 SMP to create a “shaved head” appearance. Courtesy of Ahead Ink.

is similar to a tattoo, SMP differs in several important ways. First, SMP is only applied to the scalp and no other areas of the body. Furthermore, SMP is only applied as small “dots” which mimic the appearance of a hair follicle shaved down or hair “stubble.” When these dots are placed close together, they recreate the appearance of thick, dense, but shaved hair. Second, a specialized pigment and not standard tattoo ink is used during the SMP process. Tattoo ink contains metal pigments, which may oxidize and change color over time (blacks turn a green or blue hue). SMP pigment ink, however, will not change color. Third, unlike a traditional tattoo where the ink is placed into the deeper layers of the tissue, SMP pigment is only placed into the most superficial layer of the skin. Lastly, most SMP is designed to only last temporarily and naturally fade — typically within 24 months. There is usually no abnormal appearance when it fades and can be touched-up if the patient still wants the SMP “look.”

The SMP process is similar to undergoing a tattoo. A numbing cream is usually applied to area to help with any slight pinching sensation, and a needling “gun” is used to inject pigment into the skin. The length of process depends on the size of the area being treated. Several “passes” may be necessary depending on the skin type as well.

Who is SMP for? 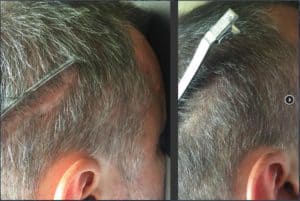 SMP to camouflage a scar from an FUT procedure. Courtesy of Ahead Ink.

SMP is really for any patient looking to improve the appearance of their scalp. However, there are typically three types of patients seeking SMP:

Should SMP be used WITH a Hair Transplant?

SMP is often a good adjunct to hair transplant surgery. Is it necessary for a good cosmetic outcome? Absolutely not. Both SMP and hair transplantation can stand independently and create good results alone. However, many patients see a benefit by combining both. This includes patients who undergo FUE to create a shorter “buzz cut” look who then use SMP to thicken the overall appearance; patients who wear their hair longer and want to thicken the entire appearance or specific regions (usually the crown); and patients with prior FUE or FUT scars who want to camouflage these further to wear their hair even shorter in the donor area.

How Long after Hair Transplant Surgery Before I can have SMP?

Most SMP experts recommend waiting 6 months after hair transplant surgery before having SMP. This is to allow 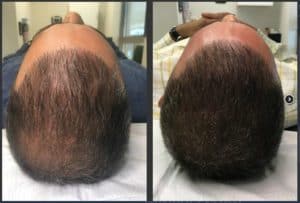 SMP used for a thickening effect. Courtesy of Ahead Ink.

time for inflammation and changes in skin tone to completely resolve, as both of these phenomenons can affect the way the tissue accepts the pigmentation. The SMP experts want to skin to be essentially back to “normal” (though this really does take a full 12-18 months) before applying SMP.

So, is SMP right for your hair loss? Possibly. To find out, we recommend starting by speaking with an SMP expert like Erik Cavagnuolo at Ahead Ink: www.aheadink.com.

*All SMP images courtesy of Ahead Ink

Newer FUE vs. FUT Hair Transplant Surgery?
Back to list
Older Can I Have an FUT (“Strip”) Surgery AFTER an FUE Surgery?
close