It’s hard to watch a YouTube video or scroll a website without seeing an ad for a “miracle” hair loss drug. Whether it is a new vitamin, a topical treatment, or a prescription oral medication, there are dozens, if not hundreds, of companies advertising hair loss drugs daily. But do any of these actually work? Are they scam or “quack” treatments? Have any of these medications been reviewed and approved by the US Food and Drug Administration (FDA)?

Finasteride was used for many years as a medication to treat prostate enlargement in men. While prescribing it to their male patients, doctors began to notice an unexpected and unintentional side effect: the male patients were seeing slowed hair loss and an overall improvement in hair quality. Based on these anecdotal findings, researchers at the pharmaceutical companies began investigating finasteride as potential treatment for androgenic alopecia or genetic “male pattern hair loss.” To understand how finasteride may treat male hair loss, the researchers needed to review how the drug actually works and why this mechanism of action may play a role in hair thinning.

Finasteride works by inhibiting an enzyme — a molecule which acts as a catalyst and allows biochemical reactions to occur — responsible for converting testosterone, the most common “androgen” or male hormone, to dihydrotestosterone or “DHT.” DHT is a byproduct of testosterone which is responsible for a number of important physiological functions in the male body. Interestingly enough, however, DHT is also the hormone responsible for hair “miniaturization” or a gradual shrinking and thinning of hair follicles in men with genetic hair loss. In other words, DHT is the hormone responsible for causing the hair to “fall out” in men with male pattern hair loss. By inhibiting the enzyme — an enzyme called type-II-5-alpha-reductase, to be exact — responsible for converting testosterone to its hair loss causing byproduct DHT, the amount of DHT in the scalp was reduced and susceptible hair follicles were exposed to lower amounts of DHT. 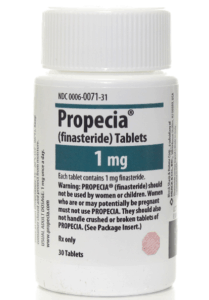 The pharmaceutical company ran the appropriate trials, submitted their findings to the FDA, and 1mg finasteride taken orally once per day was approved for the treatment of androgenic alopecia and branded “Propecia” in 1996. This news was met by excitement and optimism by millions of men living with hair loss, but what did it all really mean? Was hair loss “cured?” Did this medication “stop” hair loss? Since this medication does affect hormone levels are there any negative or unintended “side effects?”

While finasteride has been tested and proven effective, it is important to understand that it does not “stop” hair loss. Androgenic alopecia is a genetic condition, meaning it is coded in a patient’s DNA. Eventually the genes win out in the end and any hair that is genetically programmed to be lost will be lost. While finasteride cannot stop this process, it can slow it by decreasing the level of circulating DHT in the scalp. DHT is the agent by which the genes play out their coding, so reducing it theoretically slows the hair loss. The response to finasteride is variable; it seems to work the best for young men who still have a lot of hair to maintain. It does seem to lose efficacy over an extended period of time, and some men — particularly those already suffering from advanced hair loss — see little benefit from it. It is also important to note that finasteride is only indicated for male patients. Females of reproductive age are not candidates for finasteride and should avoid the medication. Finasteride is also technically only approved for treatment in the mid-scalp and crown regions of the scalp.

Furthermore, there are some potential side effects associated with finasteride. Specifically, sexual side effects. Because finasteride affects levels of important androgen (male) hormones, things like erectile dysfunction, low libido, and changes in semen characteristics can occur. According to several studies, incidence of these side effects is low (less than 2%) and subside completely after stopping the medicine. Anecdotally, it does seem like greater than 2% of users report side effects and some are persistent. In fact, several countries, such as the UK and Korea, have updated the warning label on finasteride to include a higher incidence of sexual side effects and the potential for these negative effects to persist — something now called “Post Finasteride Syndrome” or PFS. In the United States, the pharmaceutical company behind Propecia is also facing several lawsuits revolving around the side effects and whether these were known and “down played.”

Much like finasteride, minoxidil’s role in treating hair loss was discovered accidentally while using the medication for a different purpose. During an unsuccessful trial as a treatment for ulcers in the 1950s, minoxidil proved itself a powerful anti-hypertensive or “high blood pressure” medication. While trialing the drug as a treatment for high blood pressure, several observant doctors began to notice an unexpected side effect: hair growth. After a lengthy period of clinic trials, patent battles, and years of doctors prescribing an oral version of minoxidil “off label” for hair loss, a topical solution was approved by the FDA in 1988.

The mechanism by which minoxidil treats hair loss is poorly understood. Some people believe it is through increased blood supply to the scalp, while other believe it has do with the increasing the 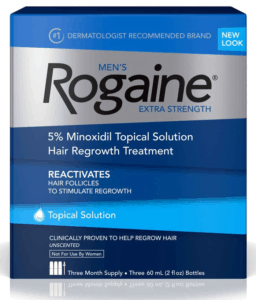 levels of certain inflammatory molecules called prostaglandins. Regardless of how it works, the US FDA agrees that it does. According to the approval studies, approximately 39% of patients will see moderate improvements in the mid-scalp and crown (back) regions from minoxidil. Much like finasteride, response to minoxidil varies. Some men do see “moderate” improvements, while others see very little benefit from minoxidil. Most improvement seems to be a thickening of thin, vellus hairs or an increase in the number of these thinner, less apparent hairs. Minoxidil also seems to have a better side effect profile compared to finasteride. The most common side effects are decreased blood pressure, heart palpitations (from the reduced blood pressure), some darkness or “puffiness” around the eyes, and hair growth in unwanted areas — like the forehead. Minoxidil is also safe for use in female patients — though the “female” version of minoxidil only contains 2% of the active ingredient compared to the 5% in the “male” solution.

Like finasteride, minoxidil does not cure or stop hair loss. It slows and may slightly improve the appearance of thinned hair. Many patients combine both finasteride and minoxidil to prevent and slow the hair loss as much as possible.

The decision to take finasteride and, or, minoxidil is a personal one. Patients should do their research and consult with both a hair loss doctor and a doctor familiar with their medical history before taking any hair loss medication. If they are interested in hair loss drugs, however, they should know that only two have been proven safe and effective and these are the two recommended by most in the hair restoration community.