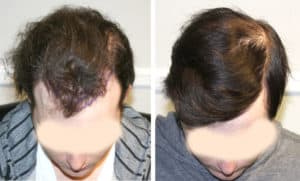 Diagnosis: FUT After an FUE “Test”

This patient is a male in his 30’s who originally presented seeking FUE (Follicular Unit Excision) surgery. He had limited hair loss in the hairline region at that time, so FUE was not an unusual request. We evaluated his donor characteristics, however, and advised him that FUE may not work well with his fine hair-type. We believed his hair follicles were likely smaller and more fragile, and probably would not accept the harsher and more damaging FUE procedure. He still wanted to try FUE, so we compromised and decided to start with a small FUE procedure in the hairline as a “test” to see how it may work with his physiology. The patient returned a year later and, unfortunately, the FUE grew poorly. FUE grows worse on average compared to FUT, but some patients do particularly poor with it. At that time, we advised him to switch to FUT. He happily accepted our recommendation, and we moved forward with a 1,200 graft FUT procedure. The procedure went well, and we believed he would grow much better with the a-traumatic FUT approach. The patient returned 12 months later and, thankfully, we were correct; he grew very well with FUT and was very pleased with the results.