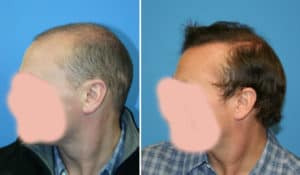 This patient is a male in his 50’s with a history of a past transplant, performed at an outside clinic, years prior. The outside clinic used modern techniques, but the density was slightly low and the patient was not properly informed of the need for a “long-term” plan as his hair loss progressed. This put him in a situation where his hair loss continued and he no longer liked the look of the transplant with his hair long. He decided to cut his hair short and try to blend everything together, but quickly realized that this defeated the reason he underwent hair transplant surgery in the first place. So, he came to us requesting a secondary or “finisher” procedure. Using the FUT technique, we removed 3,000 grafts and used these to: reconnect the frontal band/hairline to the sides of his hair where the two areas separated as he continued thinning; thicken the entire frontal region – so he could grow it longer; and strategically fill a portion of the mid-scalp/crown area to comb-in to the thicker hair in the frontal scalp. The patient returned 12 months later to happily report that he was able to grow his thick, natural hair as long as he wanted.