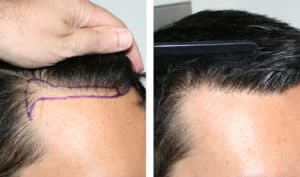 This patient is an Asian American in his late 30’s who presented with classic hairline thinning. The patient had very good hair elsewhere, and the loss was limited to the hairline region. He sought a natural hairline similar to what he had before he thinned in the region. Utilizing 1,200 grafts, we rebuilt a new hairline and densely packed the small band behind it. The patient returned 12 months later and was very pleased with the results. It is worth noting that building a natural, soft appearance in the hairline with dark, coarse hairs like his is not an easy task. Hairline shape, irregularity, and use of only the finest single-hair grafts must be carefully considered during this type of procedure.