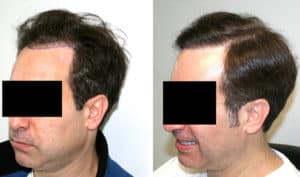 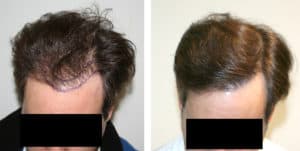 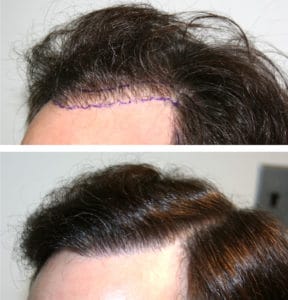 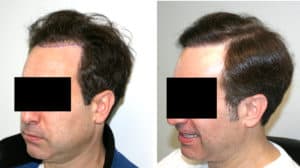 This patient, a doctor himself, is a male in his 40’s who presented for a hair transplant repair. The patient had a procedure throughout the hairline region many years before. The patient still had a considerable amount of hair at the time, and the prior procedure was just to slightly enhance the hairline area. The work looked acceptable at the time, but things changed as his hair continued to thin. As the surrounding hair thinned, it revealed that the previously transplanted grafts were bulky, placed too far apart, and also created a large amount of scarring in the recipient region. By the time he presented to our clinic, he had thinned throughout the entire frontal scalp. We recommended an 1,800 graft FUT to densely rebuild the hairline/frontal band region (fixing the prior transplant) and strategically fill behind the band throughout the rest of the frontal scalp. The procedure went as planned, and the patient returned 12 months after surgery. As a doctor himself, he greatly appreciated the difference in our technique compared to the outside clinic and the results it created.