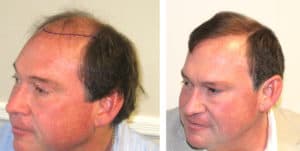 This patient is a male in his late 50’s who presented with advanced, Norwood VI level hair loss. While his donor hair was somewhat soft and fine, he did have adequate supply for surgery. His goals were to achieve a conservative hairline and fill as much on top as possible. He wanted to maximize his coverage by growing his hair longer and choosing an optimal hair style. We believed his goals were realistic and recommended doing an “as much as possible” or “AMAP” FUT mega-session procedure, aimed at removing as many grafts as safely possible in one sitting. We performed a strip (FUT) harvest and removed 2,800 grafts. We used these grafts to rebuild a new hairline and strategically fill the frontal and mid-scalp. Over the next year, the patient, as planned, grew the transplants longer and used a “parted” hair style to maximize coverage and density. He returned 12 months later and clearly the strategic plan payed off.