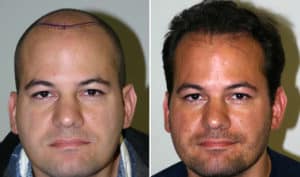 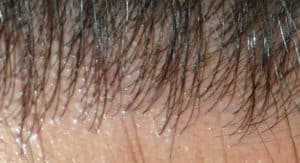 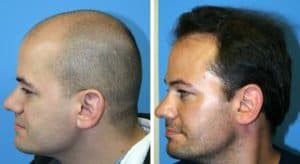 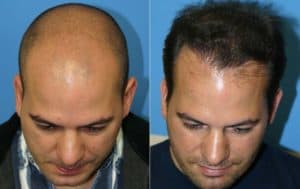 The patient is a male in his late 30’s who presented with diffuse hair loss throughout the entire top of his scalp. He previously wore his hair longer, but reportedly shaved it short after it appeared worse and worse as it thinned. He presented to us with the goal of growing his hair long again. He asked for a strategic, conservative hairline and as much “fill” on the top of the scalp as we could get. We informed him that the emphasis would still be on the frontal half of the scalp. This is the most cosmetically significant region, and we must be transplanted correctly or the transformation simply won’t work. However, we also explained that we would attempt to strategically fill through the mid-scalp and slightly into the crown region; this would allow him to grow the hair longer and achieve greater coverage in the crown area. We were able to remove 3,000 grafts (via the FUT technique) safely in one sitting and use the grafts to execute the plan. He returned 12 months later, and the transformation was undeniable. We achieved his goals and provided him with the long hair he wanted.